Last year (2015), I was asked to write an article on “Secular Spirituality and Humanistic Judaism”for a forthcoming book. I’ve always found the IISHJ Colloquium and publication Secular Spirituality: Passionate Search for a Rational Judaism to be one of our more interesting conferences/books, and writing the article was a moving experience in its own right.

In that article, I explored the human importance of meaningful moments regardless of one’s theological conclusions about the universe. As I was thinking back over 2015 for a “year in review” program with Kol Hadash Humanistic Congregation, I was reminded again and again of “media moments” that deeply moved me, from their own power and from their connection with contemporary events. Here, then, are some of my most meaningful media moments of 2015.

In the aftermath of the Charleston church shooting, State Representative Jenny Horne’s passionate speech in favor of removing the Confederate Flag from the South Carolina State House moved me. There were many moving moments that week – including the forgiveness of the bereaved, and the memorial service itself. But this one captured me; witness the power of human connection and concern to transcend racial and historical division.

I came across a beautiful article in Esquire magazine by Tom Junod from 2014 about Fred Rogers, AKA Mr. Rogers. A beautiful, kind, generous human being whose honesty shone through every time. Even receiving a lifetime achievement award at the Daytime Emmy’s was a teaching opportunity. 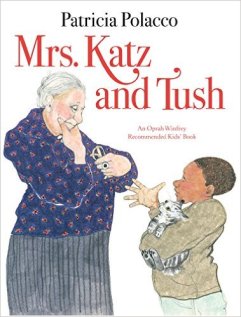 For some reason, reading Patricia Polacco’s Mrs. Katz and Tush to children , both to my own and at the Kol Hadash Humanistic Congregation Yom Kippur family services put me over the edge and tears flowed. Perhaps it’s the power of personal connection to transcend ethnic and racial difference again, or the sharing of Jewish culture to others in an open and welcoming way, or the idea that an older woman without her own children finds a family who love her and call her “bubbe.” Or maybe as my own children grow older, I’m thinking more about legacy, and their relationships with their own grandparents, the passage of time and the power of memory.

In the aftermath of the terrible terrorist attacks in Paris in November, a father comforted his son who was afraid they would have to move to be safe. So many aspects of this video moved me (and not only because I could understand the French!): a father comforting his son; the power of open national identity to welcome an Asian family enough that the father quietly asserts, “France is our home”; the calm assertion that they may have guns but “we have flowers.”

Everyone has these kinds of moments – a Facebook status or online article that isn’t just funny, or insightful, or clever. Instead, it is an experience that makes you stop what you are doing and watch, and listen, and experience, and think, and feel. I do not wish for more such tragedies that often produce such moments for 2016. At the same time, these experiences are what I mean when I speak and write and think about “secular inspiration.”

Adam Chalom is the Rabbi of Kol Hadash Humanistic Congregation in north suburban Chicago. He is also the Dean for North America of the International Institute for Secular Humanistic Judaism.
View all posts by Rabbi Adam Chalom →
This entry was posted in General HJ. Bookmark the permalink.